With the growing demands for home automation system in India market, the demand for high durability, lots of features and less cost of ownership is growing day by day. This has built pressure on manufacturers to bring system that are easy to install and are maintenance free which in turn will reduce the total cost of ownership to client.

With the above things in mind Fox Domotics have built WiFi range of smart systems which are easy to install and are maintenance free system. These are IoT (internet of things) based system which connects to your existing WiFi network present at your home and can be controlled through mobile apps directly as the mobile devices are also in the same WiFi network.

The difference between wired system and wireless system

In wired system all of the devices are connected through a CAT 6 cable for communication between each other. The total cost of CAT 6 cabling increases as it’s conduct laying and labor cost is huge. Even though we lay CAT 6 cable we need a strong WiFi network for our mobile, smart TV, laptop etc. as these devices can only connect to internet via WiFi only.

With Fox Domotics WiFi smart systems we don’t need to lay CAT 6 cable and hence saves huge cost. Our WiFi smart systems connects to same WiFi network as the mobile are connected to and can be controlled through mobile devices and Voice command through Alexa, additionally it has touch and IR remote control as well.

The WiFi is the most secured and common wireless system present in any home our office. For internet WiFi is the only wireless technology used world wide for home and office. It is most secured network in the world and also give fast speed.

If we choose any other Wireless network than still we need to have WiFi network in home for internet and also mobile device only connects to WiFi network. So the home would have 2 network, first is WiFi for mobile and second is non-WiFi for home automation. In this condition it would require a bridge between 2 network that is known as Hub, which again adds cost to whole system. further it complicates overall installation and maintenance of the entire system which adds to extra cost of ownership.

The  myth about WiFi network is that it can not handle high load of data thus becoming slow and thus people misguide to have home automation on separate non-WiFi wireless network, which is not true.

As we see in our daily use that all your video data, HD video data are streamed on WiFi network. now a days we have IP camera which exists on same network. Whole office has many mobile, laptops, printers and even PC connected to WiFi network for internet and local data exchange happening all the time, without any issue.

Today its the fastest, secured and can handle heavy load of data with out any error.

Don’t get misguided by any one as you are using WiFi every day without any failure in your home or office.

We manufacture motors as well

We are the number one brand in India for WiFi based home automation system. We have been selected as top 10 home automation brand by Silicon India magazine in year 2018. 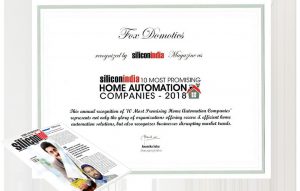